Gallery Opening of the Off-White™ Concept.

“I am fascinated by the relationship between painter and subject. For me these works are my way of saying thank you to my friends, a way of allowing our friendship to last forever.” — Lucien Smith, April 2018 EM PTY Gallery is proud to present its inaugural exhibition Lucien Smith “FRIENDS”, curated by Virgil Abloh. This show presents a series of intimate painted portraits , each one captured initially through the filter of his iPhone. Here, Smith embraces the impromptu and the intuitive, and shows off his signature brisk and light brushwork. His inner circle as subjects, coupled with the painting’s small scale distinguishes them as more personal beside his large abstract, albeit romantic, paintings of natural phenomena, such as Rains and Floods.
Every work illustrates a snapshot, a moment that brings the viewer into Smith’s world. His friends are in casual repose- mid- conversation, petting a rabbit, sleeping, playing music, or showing off a prize catch. A delicate and loving touch, these portraits were made in his Montauk home studio using traditional oil paint on linen. In practice Smith recalls the speed painting portraits of Caravaggio, Andy Warhol’s “circle”, and Elizabeth Peyton’s melancholic gem-like studies. His short strokes resemble old classic paysage compositions, set softly in today’s overly saturated world. His “FRIENDS”, which include Lili, a child and his dog Yoda, are open to dialogue as the audience joins in, invited to be part of his community. Smith’s harmonic muted palette captures the subtle Montauk light, pulling us into a dreamy realm. These paintings are fragments of longer visits, leisurely walks on the beach and even a fishing trip. Days long behind, moments we encounter and store away as extended memories. In their repainting, there is a mixture of nostalgia, memory and longing. We recognize his friends as our own. Abloh has envisioned his store, as a social space, and this collaboration extends this practice. This first collaboration between Lucien Smith and Virgil Abloh is celebrated with a T-shirt alongside the exhibition. Lucien Smith (born in Los Angeles,CA in 1989) graduated from Cooper Union in 2011 with a Bachelor in Fine Art. Recent solo exhibitions include Cosmas and Damian at Moran Moran, LA (2017); Tigris at Skarstedt, NY (2014); and Nature is My Church, Salon 94 (2013). Smith’s work has been included in various group shows: MIDTOWN at Lever House, ANAMERICANA at the American Academy in Rome, Rome (IT); Sunsets and Pussy at Marianne Boesky, NY; and is featured in many private and public collections. He currently lives and works in Montauk, PhNY.
Virgil Abloh (born in Rockford, IL in 1980) is an artist, architect, engineer, creative director, and designer. After earning a degree in Civil Engineering from the University of Wisconsin Madison, he completed a Master ́s degree in Architecture at the Illinois Institute of Technology. It was here that he learned not only about design principles but also about the concept of collaborative working. He studied a curriculum devised by Mies van der Rohe on a campus he had designed. Currently he is the Artistic Director of Menswear at Louis Vuitton and the Chief Creative Director and head designer of menswear and womenswear at Off-WhiteTM. "EM PTY GALLERY” is a contemporary art gallery founded in 2017. It is a new conceptual platform merging art and programmed experiences. It is a physical space in the SOHO area of New York City with the capability of having satellite temporary iterations around the globe. It is essentially a open-space formatted to exhibit both the works of traditional and untraditional artists. The think tank surrounding the open space is that it is multifaceted, including thoughts and perceptions from different disciplines. A playground for the experimentation of mixing different branches of art and current culture and exercising these actions to the Nth degree. 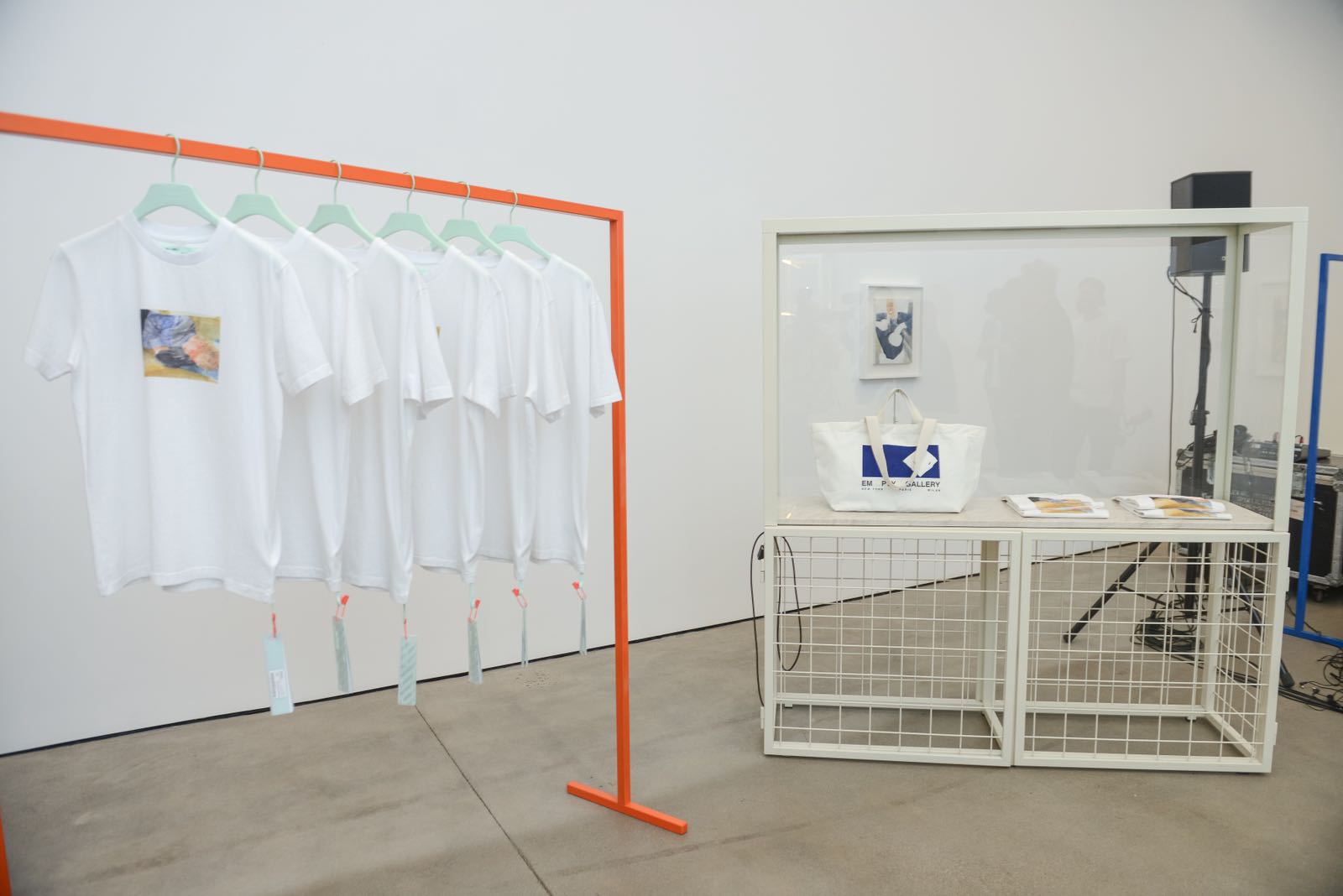 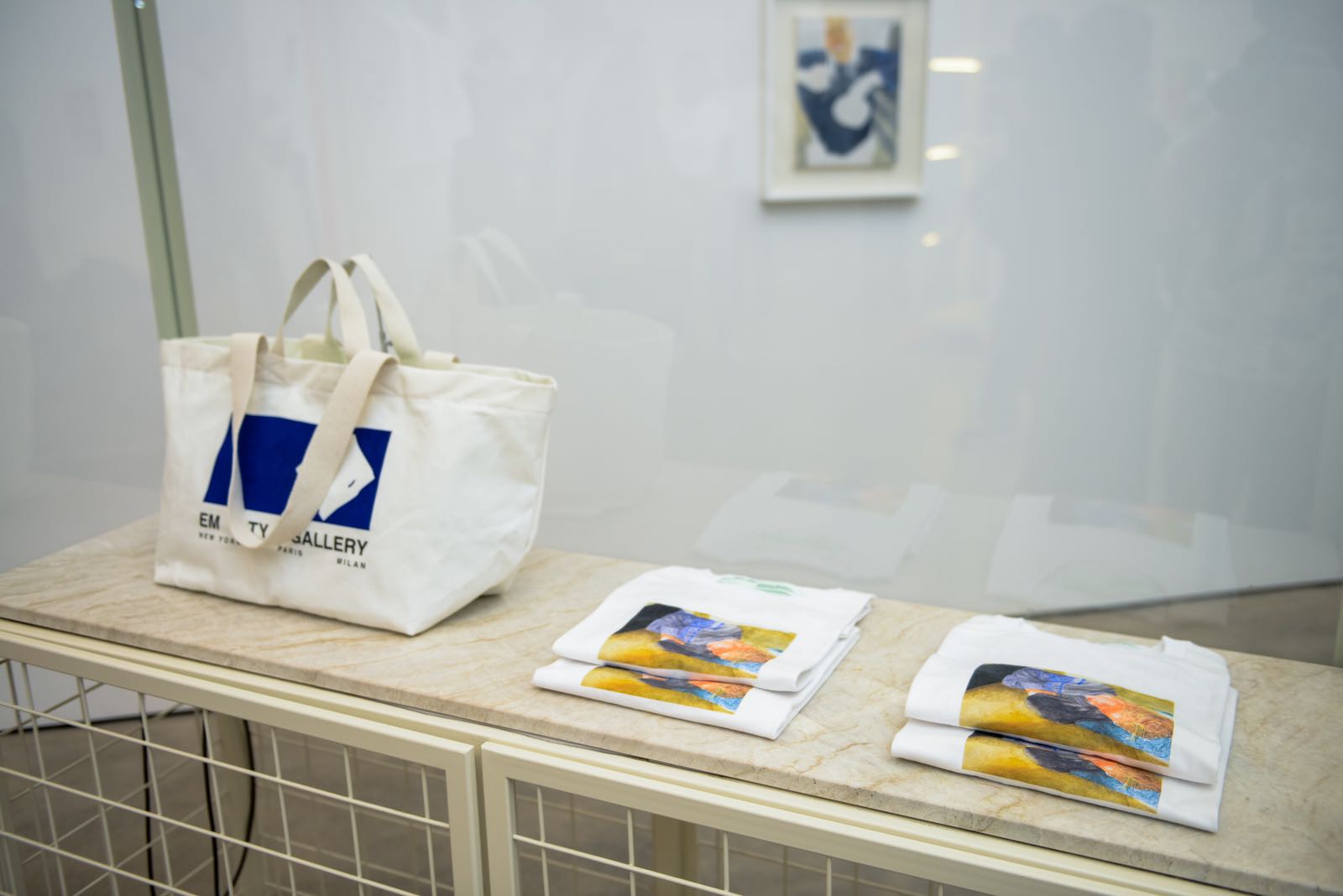 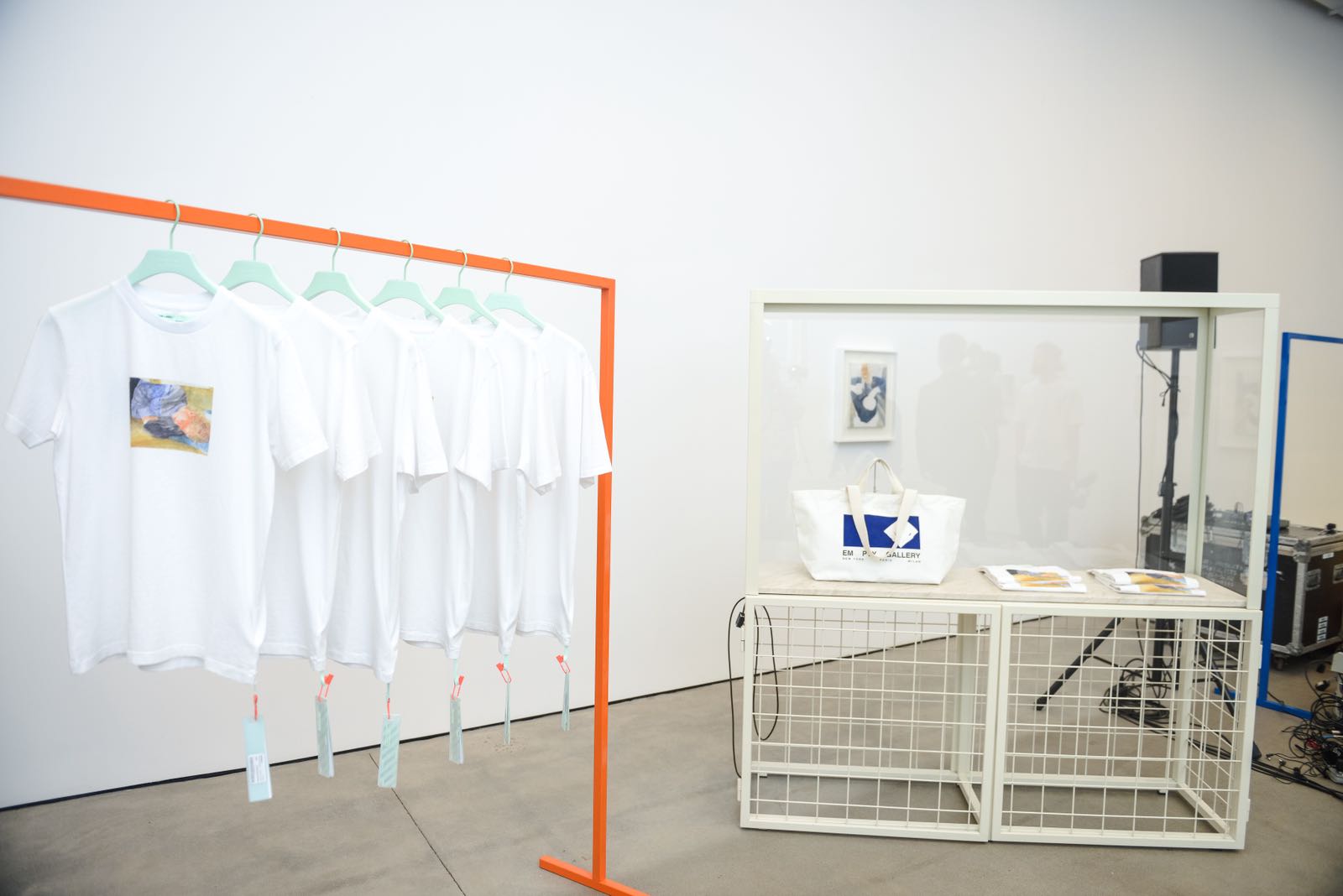 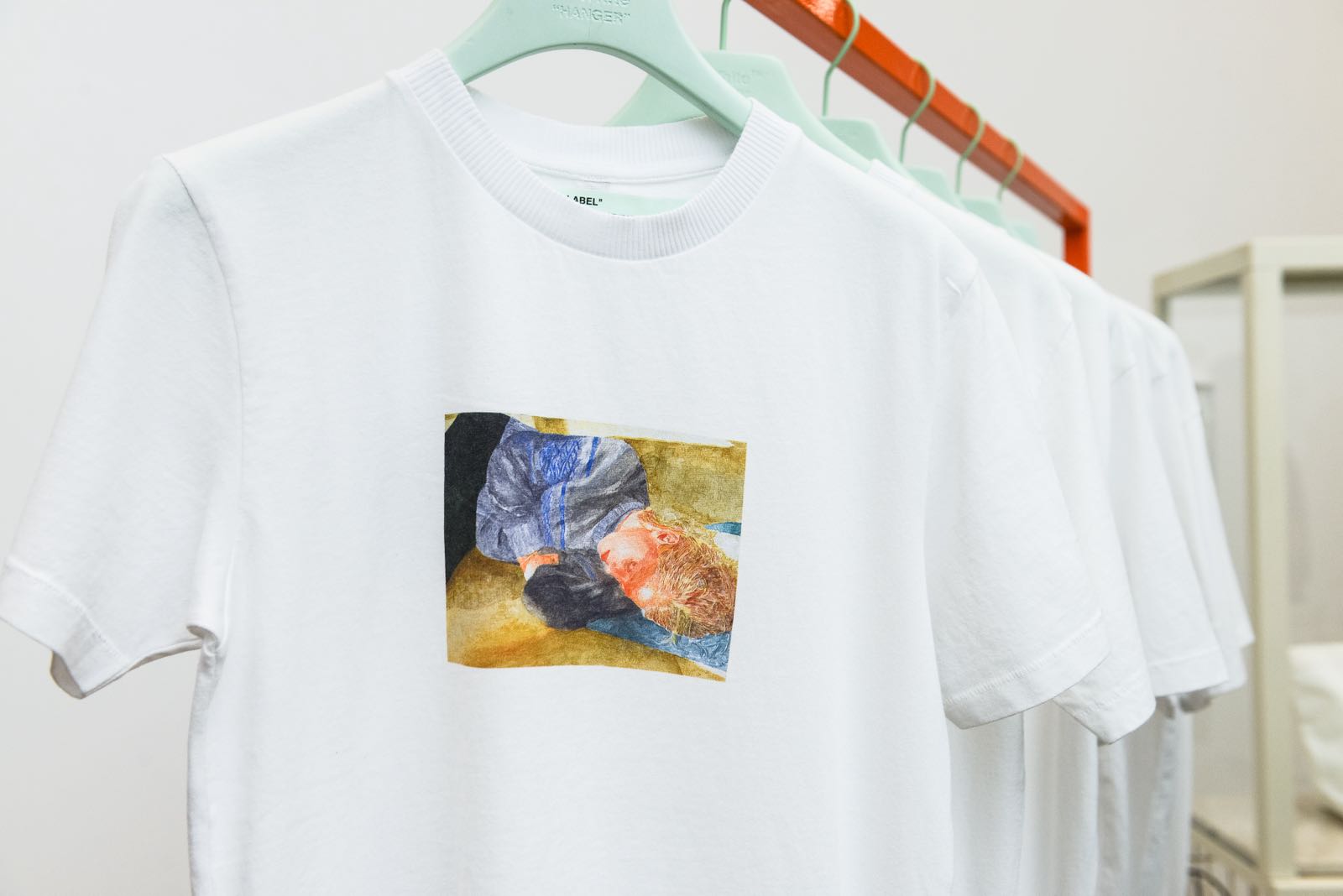 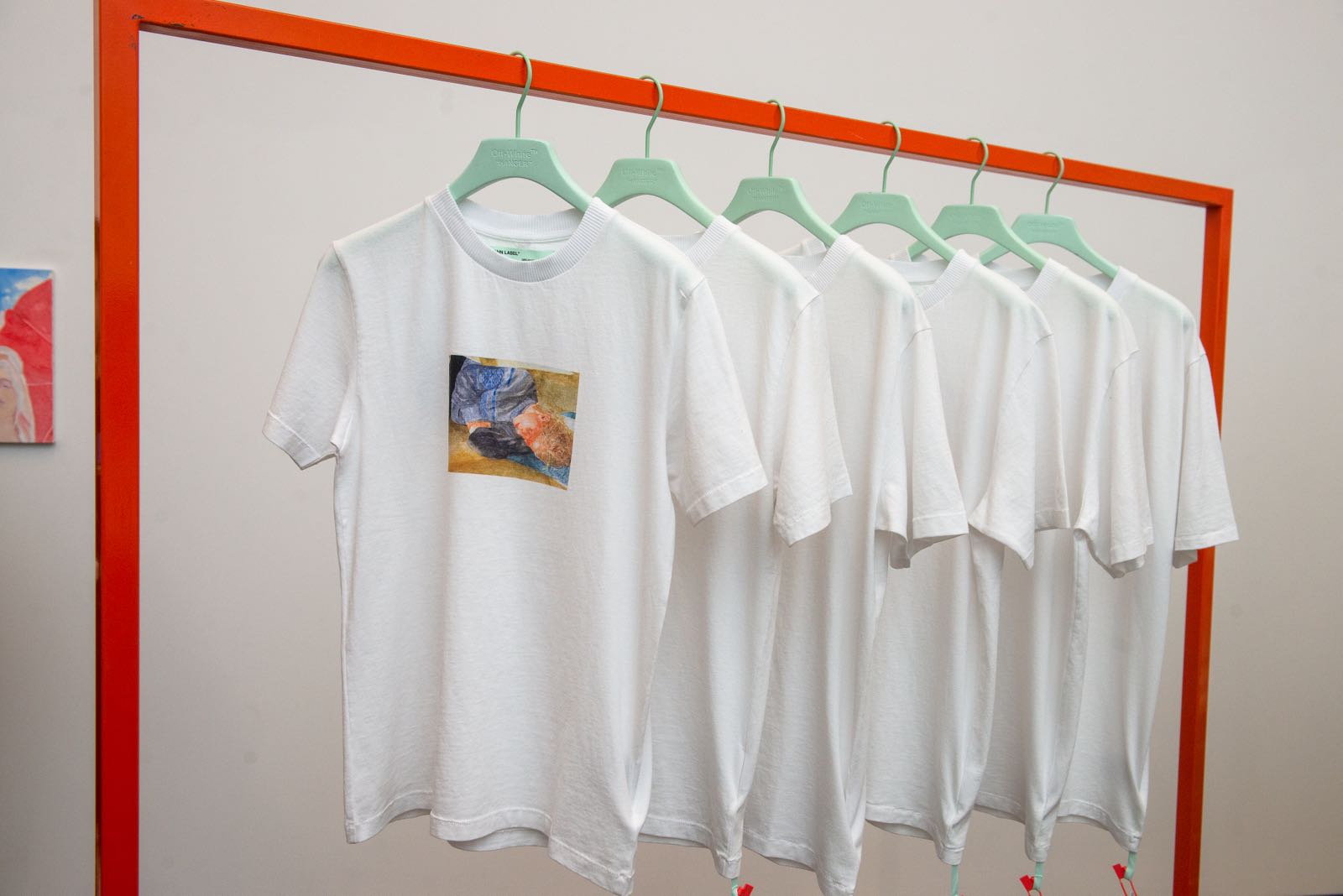 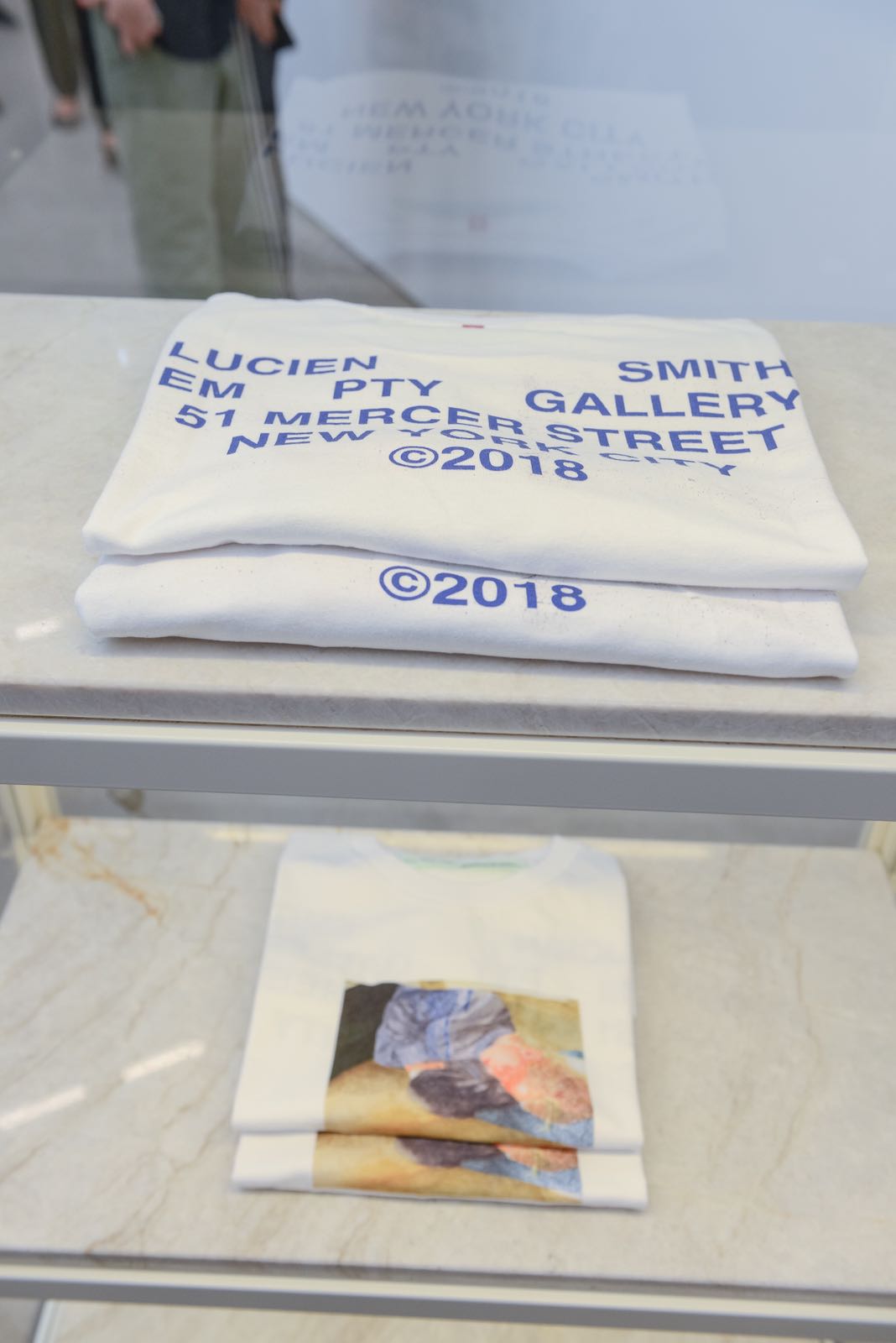 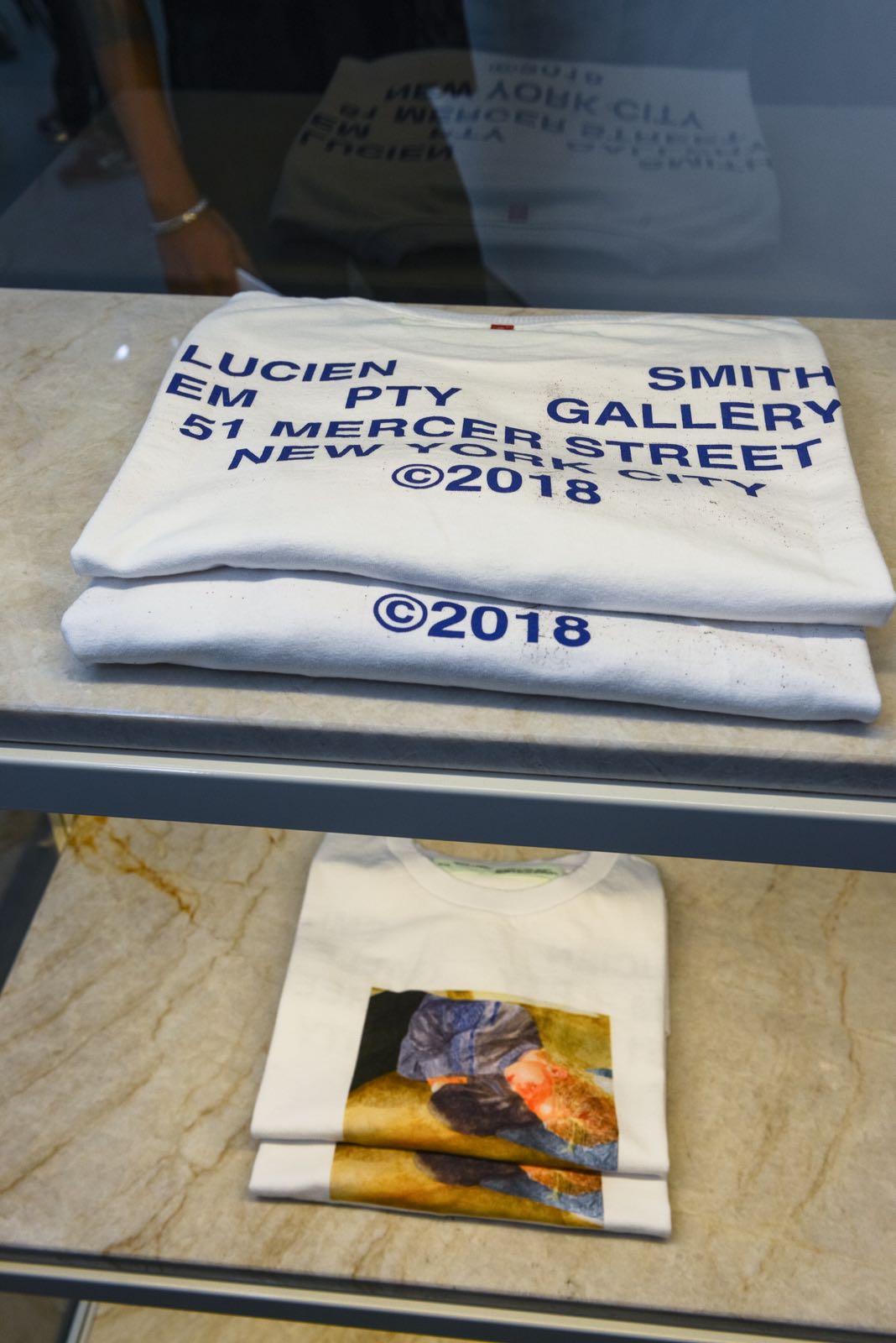 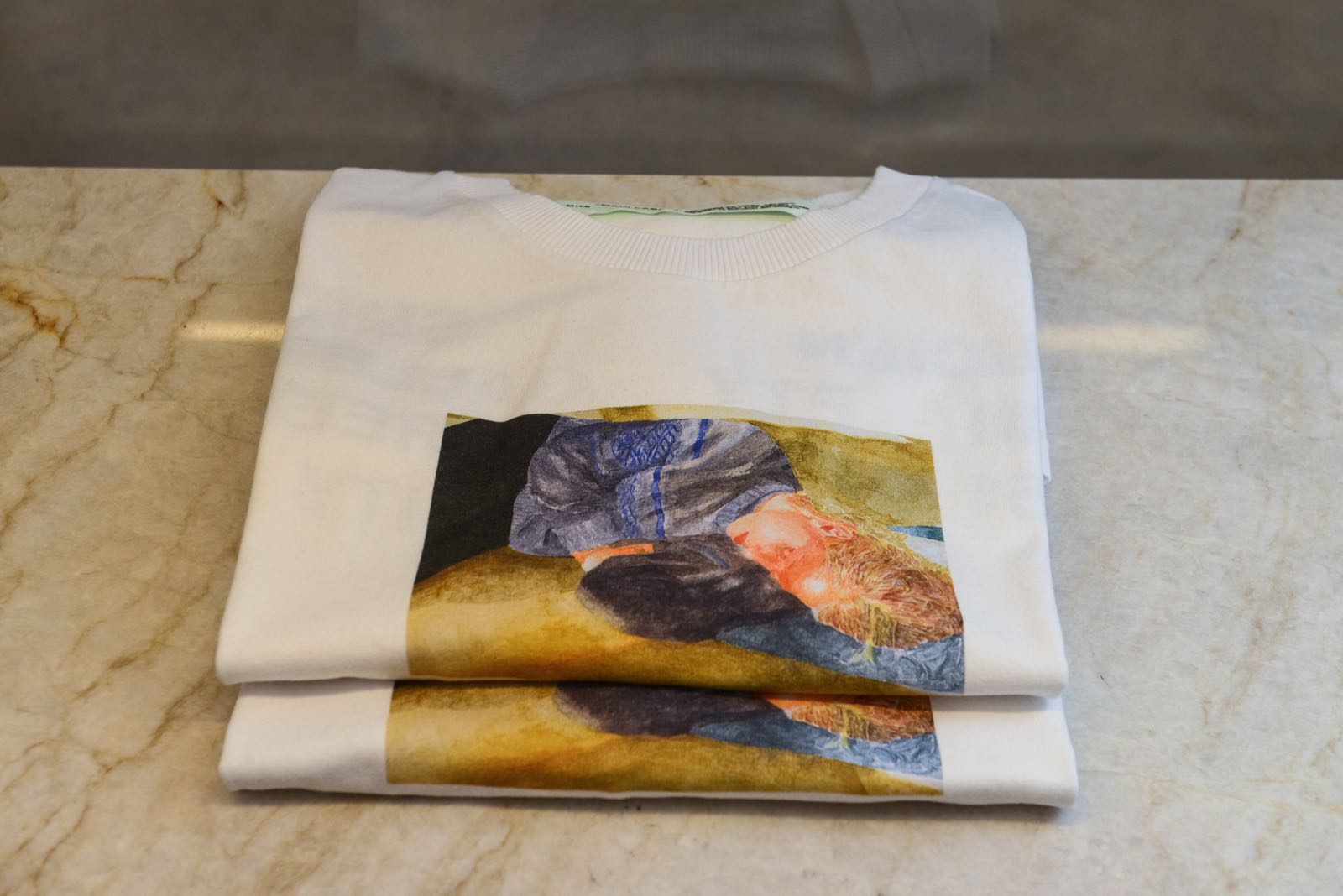 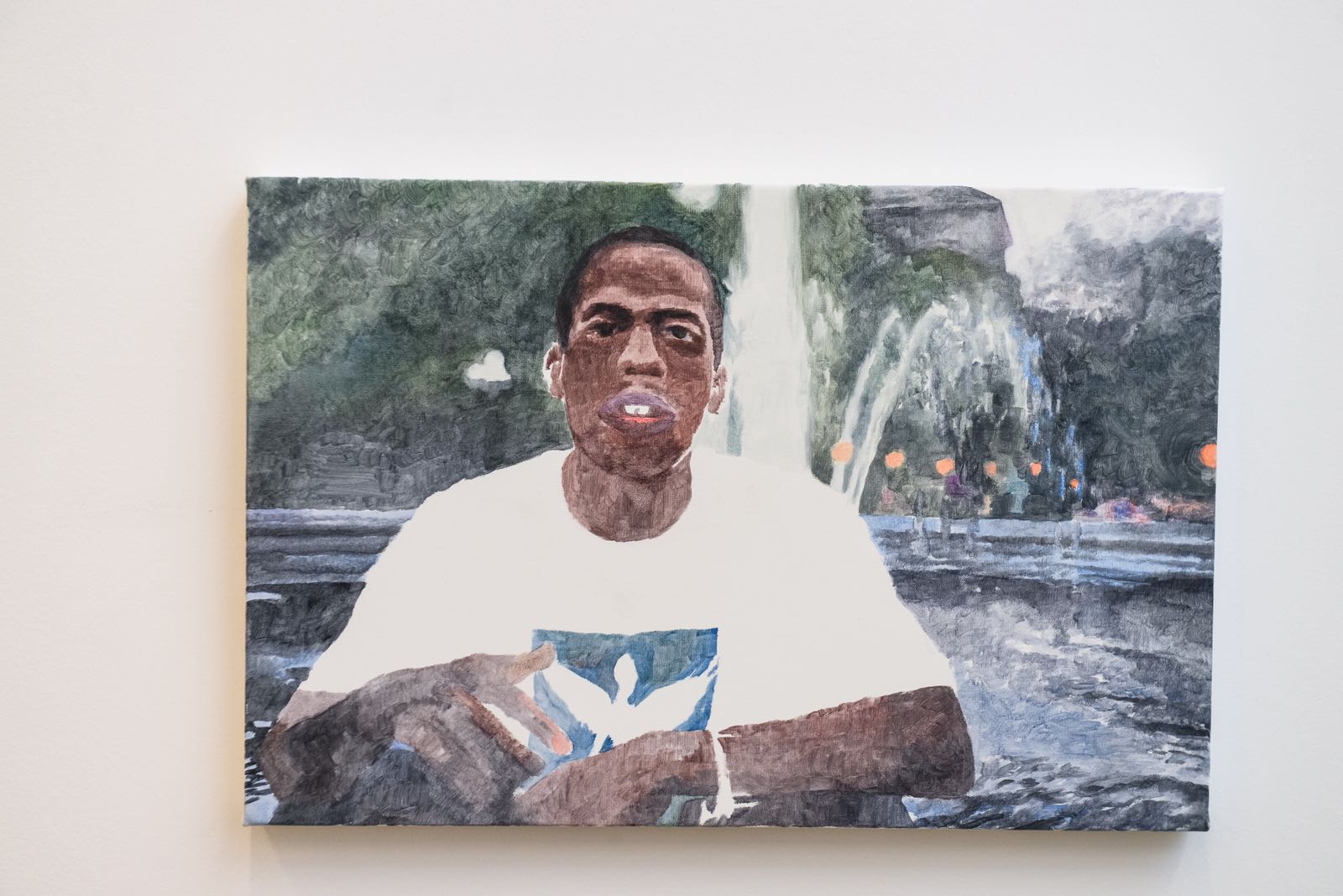 Gallery Opening of the Off-White™ Concept.

"I have this memory from when I was a kid of lying in the forest, when you wear a sweater and the leaves stick on you." With the EM PTY GALLERY in the New York City, Virgil Abloh once again demonstrates his skill to take a personal memory in the spirit of youthfulness as an inspiration and construct a physical dwelling that emulates inherent emotion, the instant one steps through the building’s facade. His art is often recognized as the pinnacle of the craft of the engineering emotions, through architecting an experience where two different worlds coexist within a structure. The new gallery space in New York once again show cases that Virgil Abloh has never been one to let given structures limit his creativity, on the contrary, “Paths of displaced Nature” invites every visitor to be engulfed in a world that expands past its physical constraints. With the art of merging two juxtaposing opposites, the creative director intertwines the two entities of a living and breathing forest with a constructed, man-made building, into one harmonic space. The result is the conceptual and enticing EM PTY GALLERY, industrial by nature, it beckons one to experience a piece of nature in the concrete streets of the city. Accompanied by natural sounds of birds chirping, leaves falling and a winding path along industrial clothing racks embedded in birch trees, “Paths of displaced nature” generates a surreal moment in everyday life and exemplifies and evokes the experience of retrieving blissful childhood feelings as well as submerging one’s mind into Nature. This unique exhibition encourages visitors to take a break from the daily routine and focus on the essential aspects of existence. 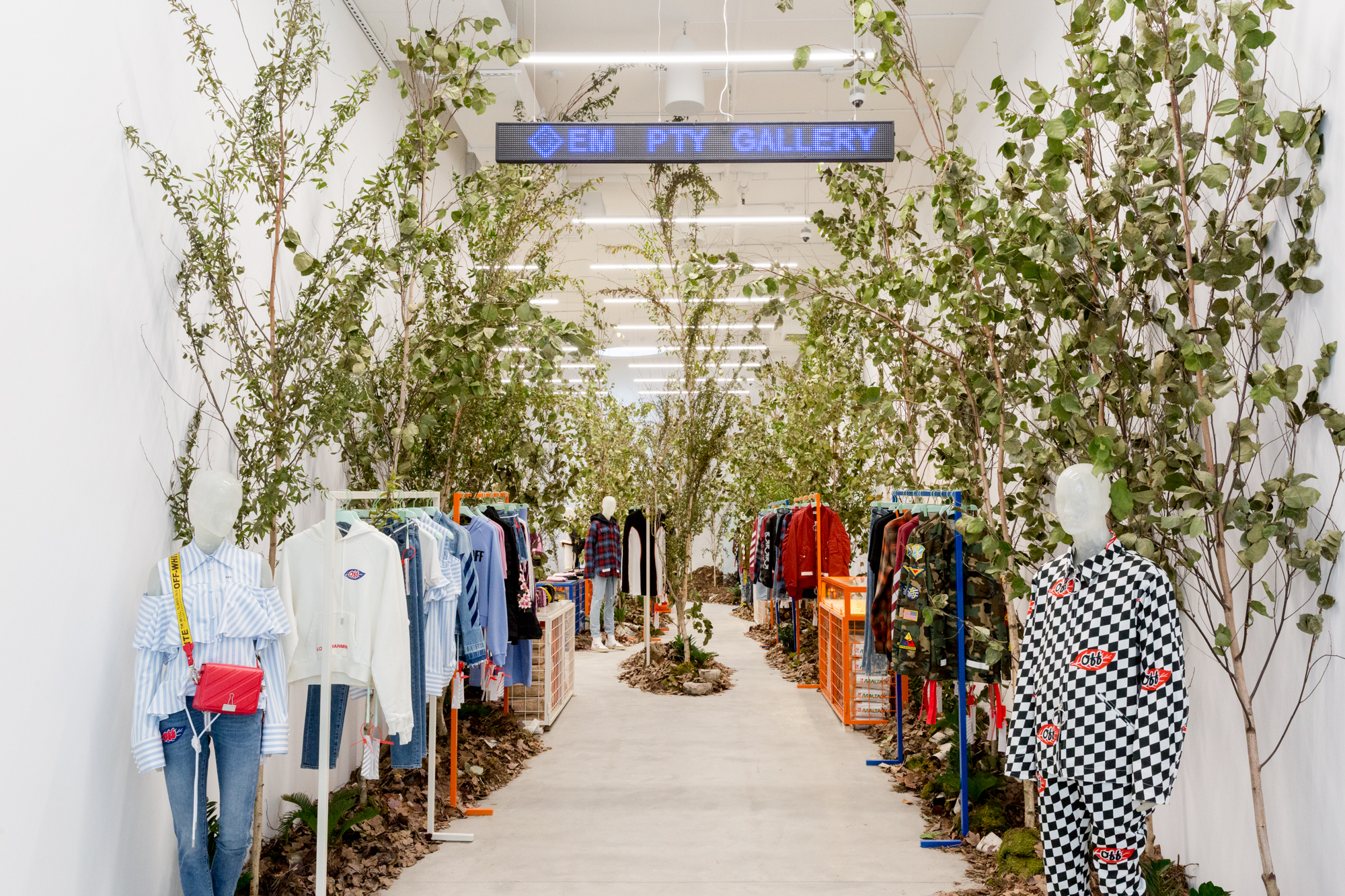 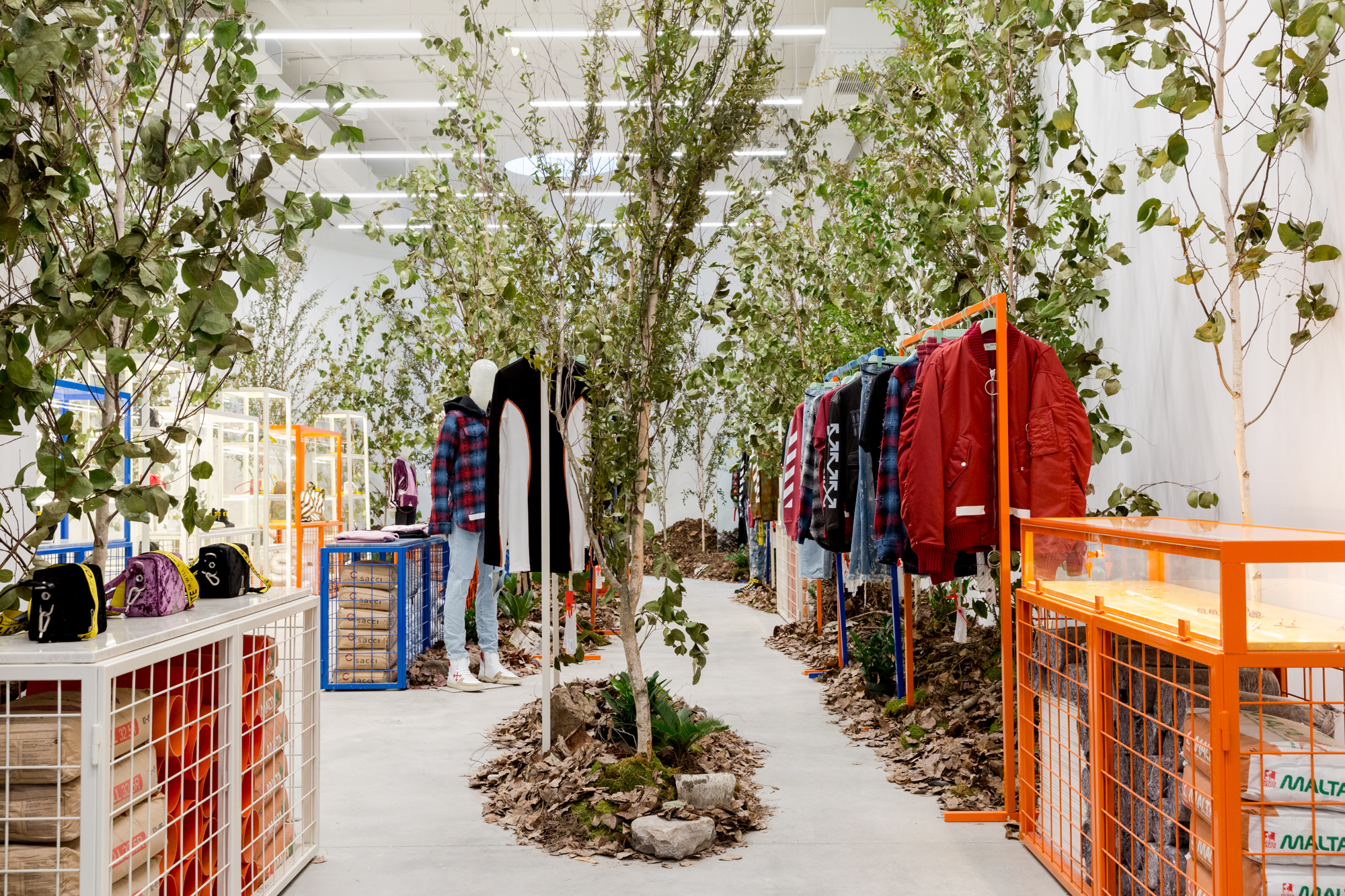 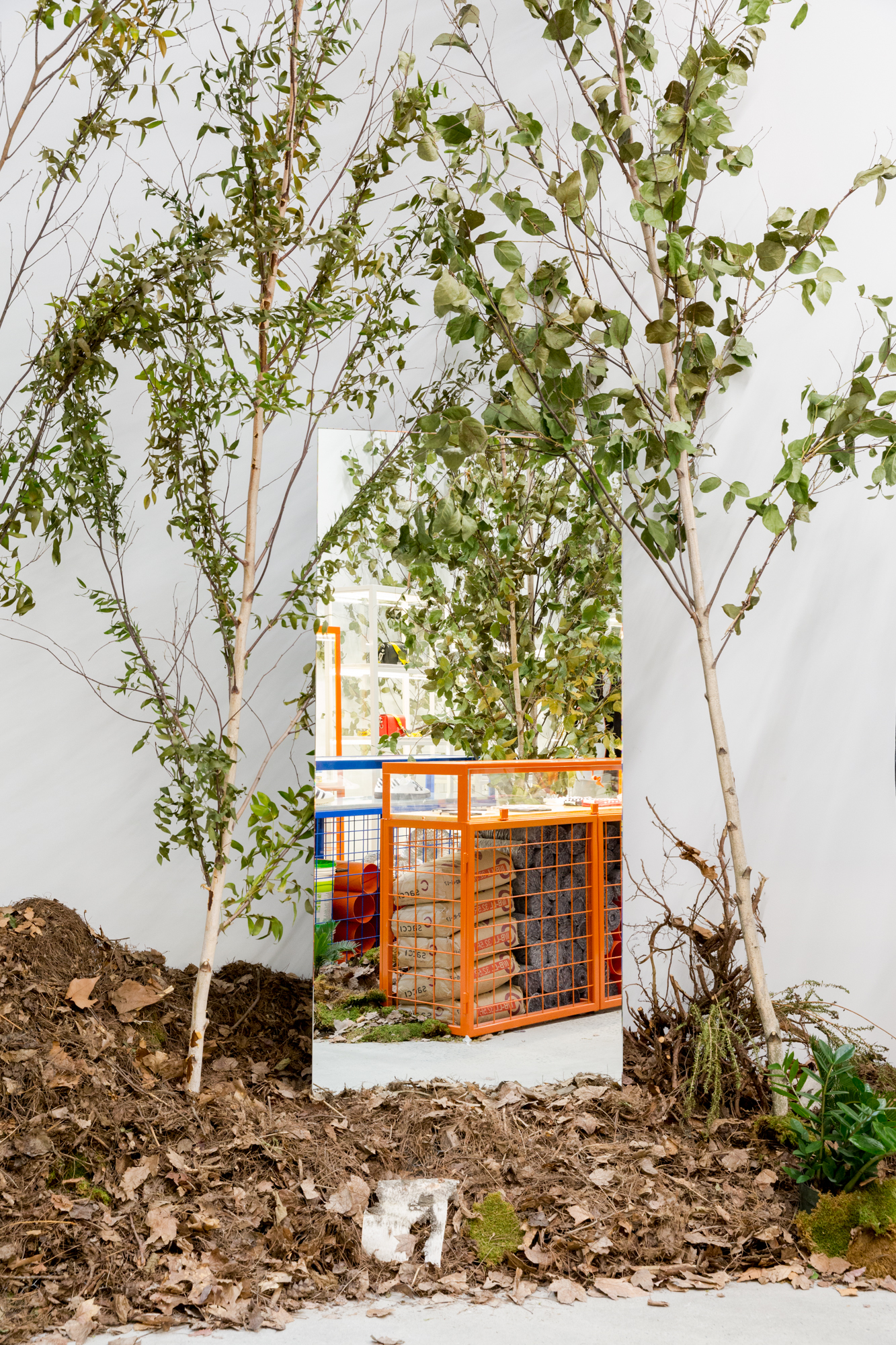 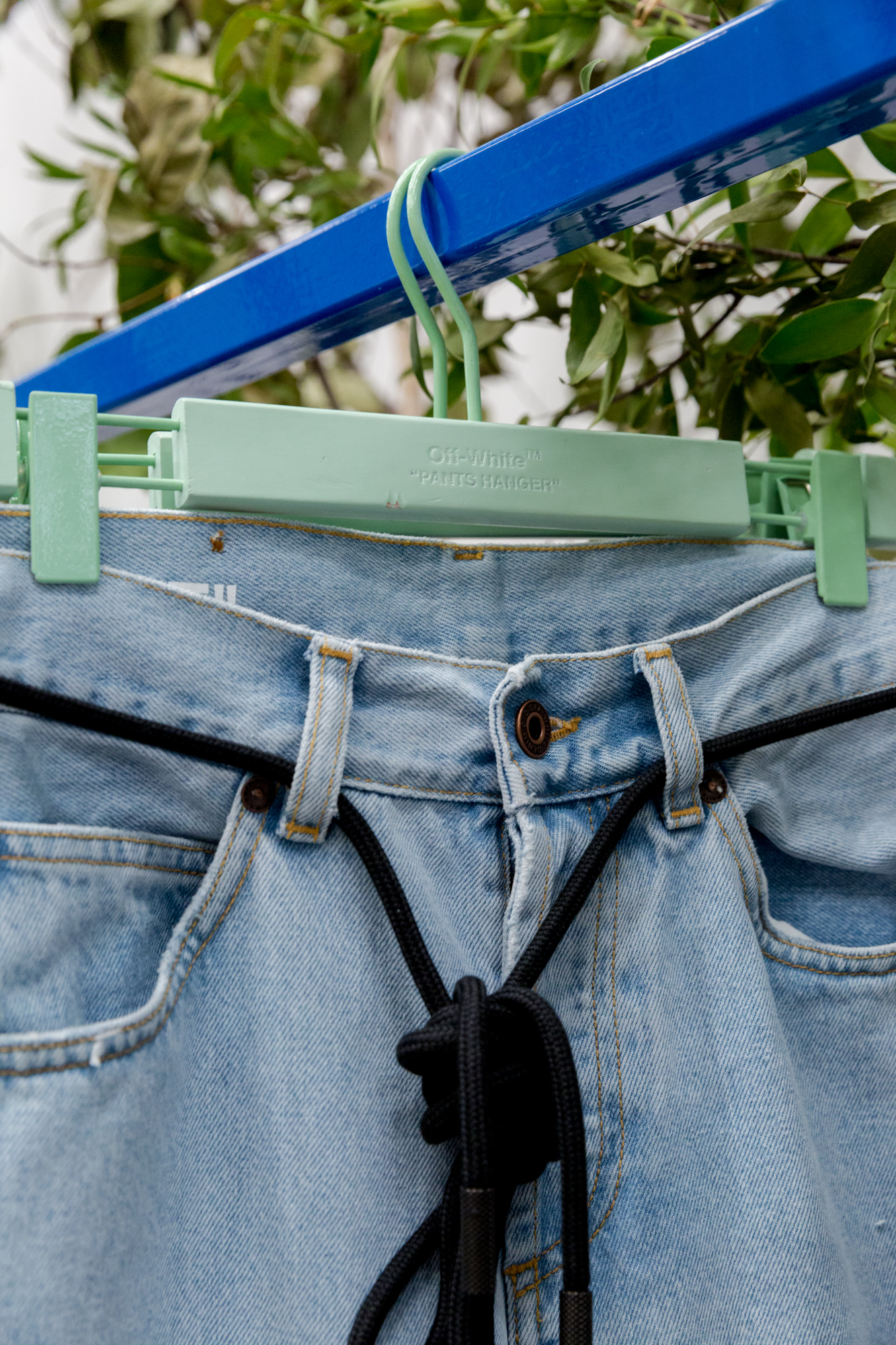 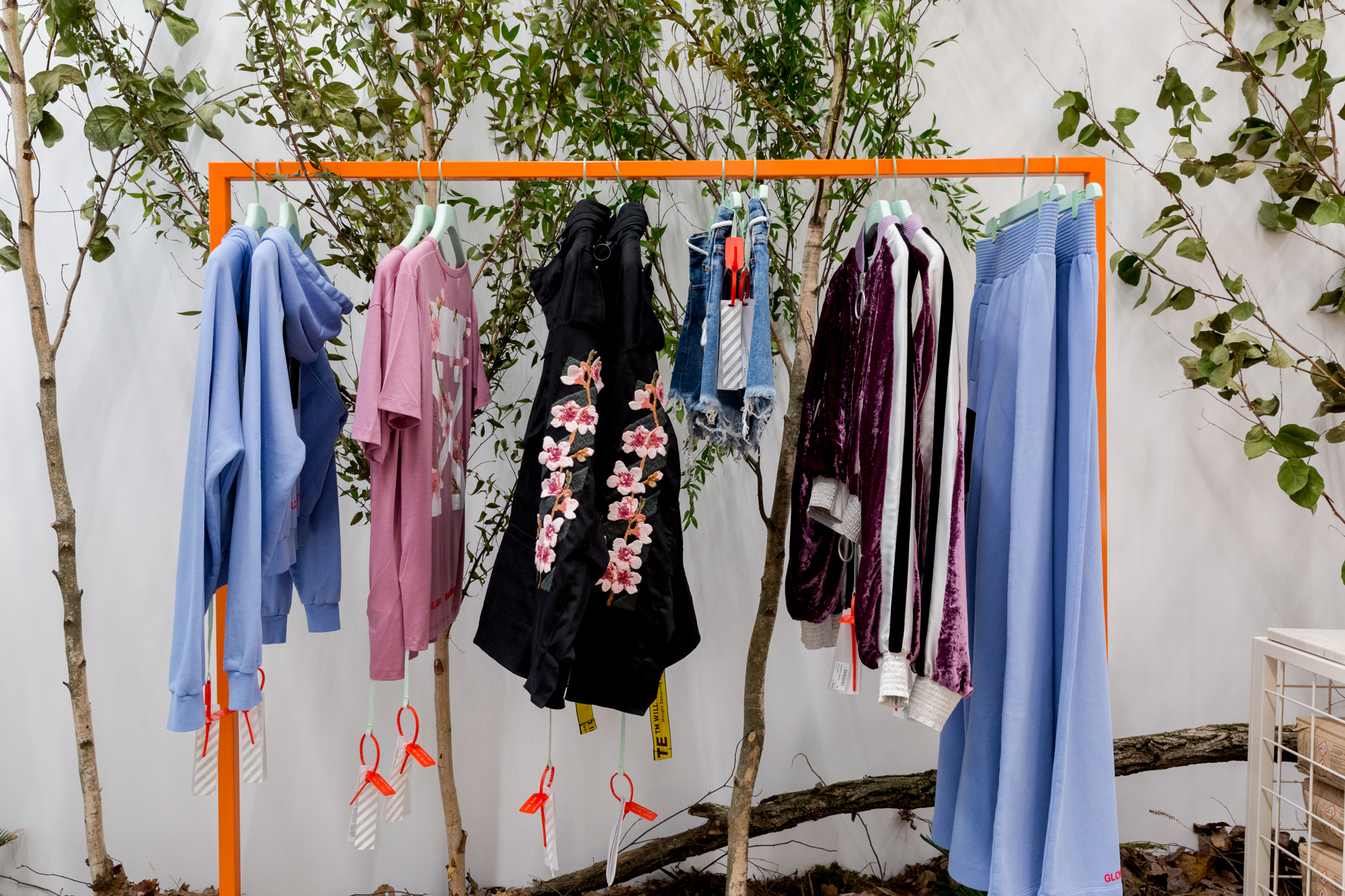 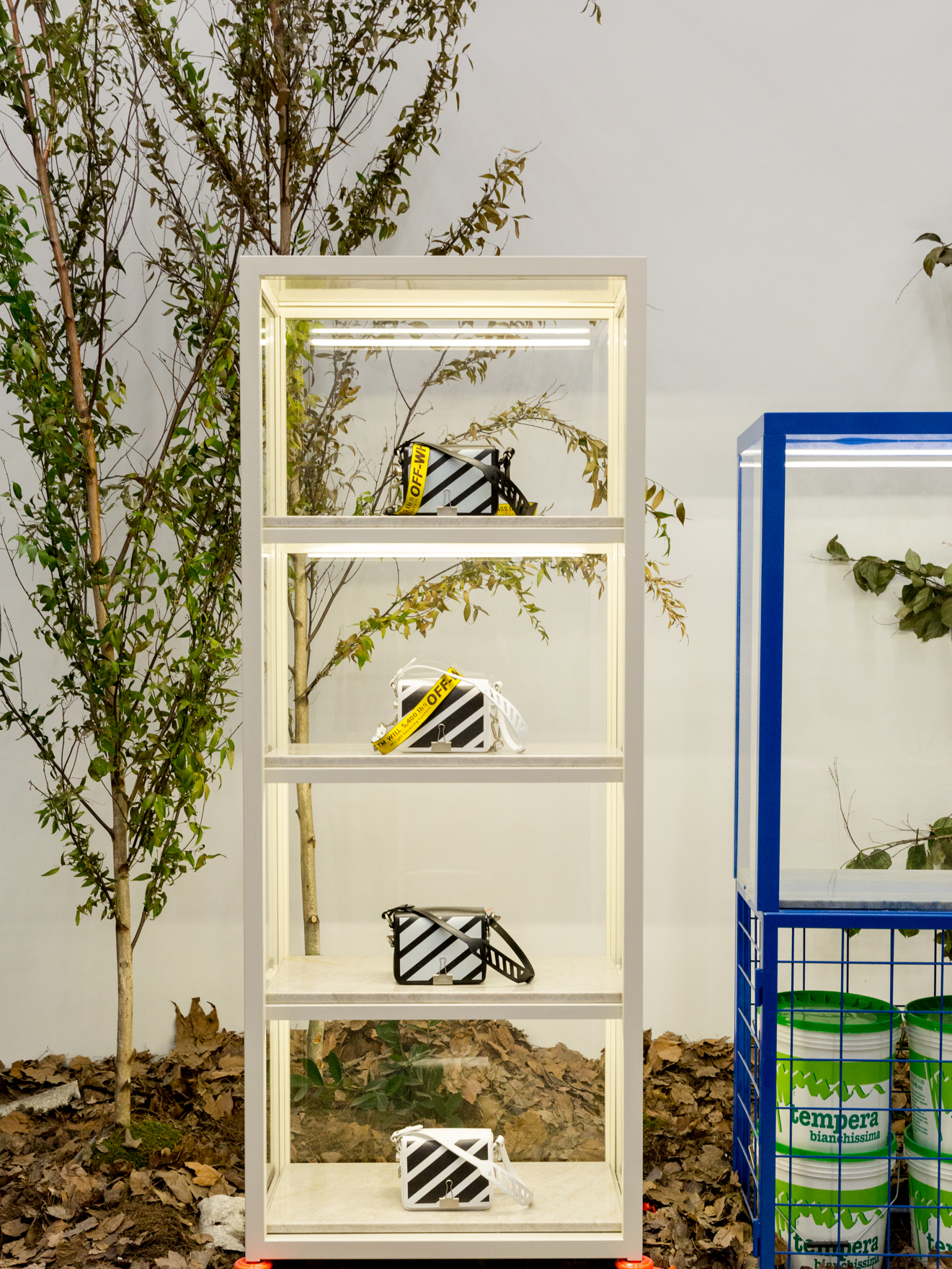 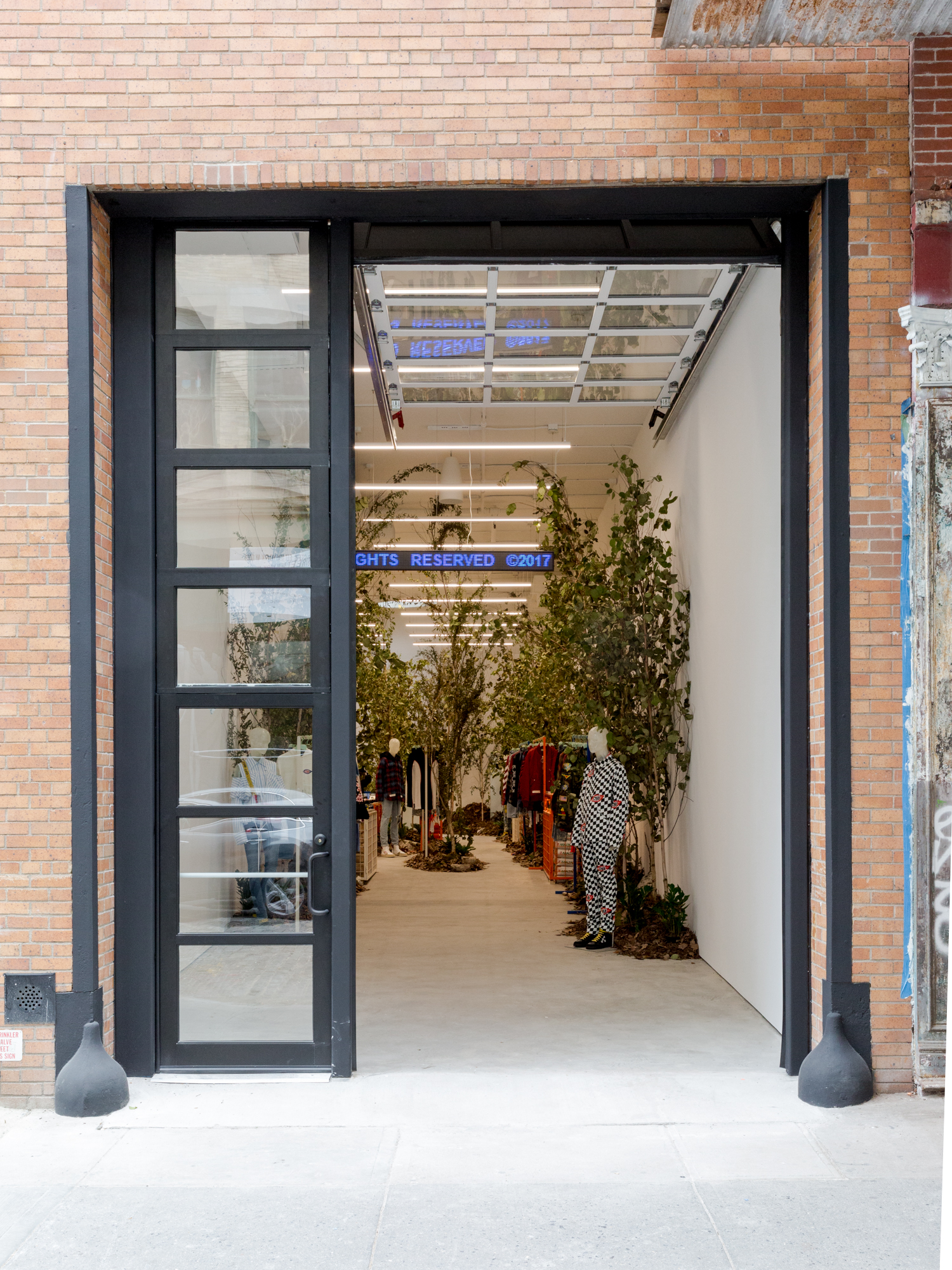 WHAT:
Virgil Abloh open's his first retail space in the United States, "EM_PTY Gallery".
OFF-WHITE c/o VIRGIL ABLOHTM Defining the grey area between black and white as the color Off-WhiteTM 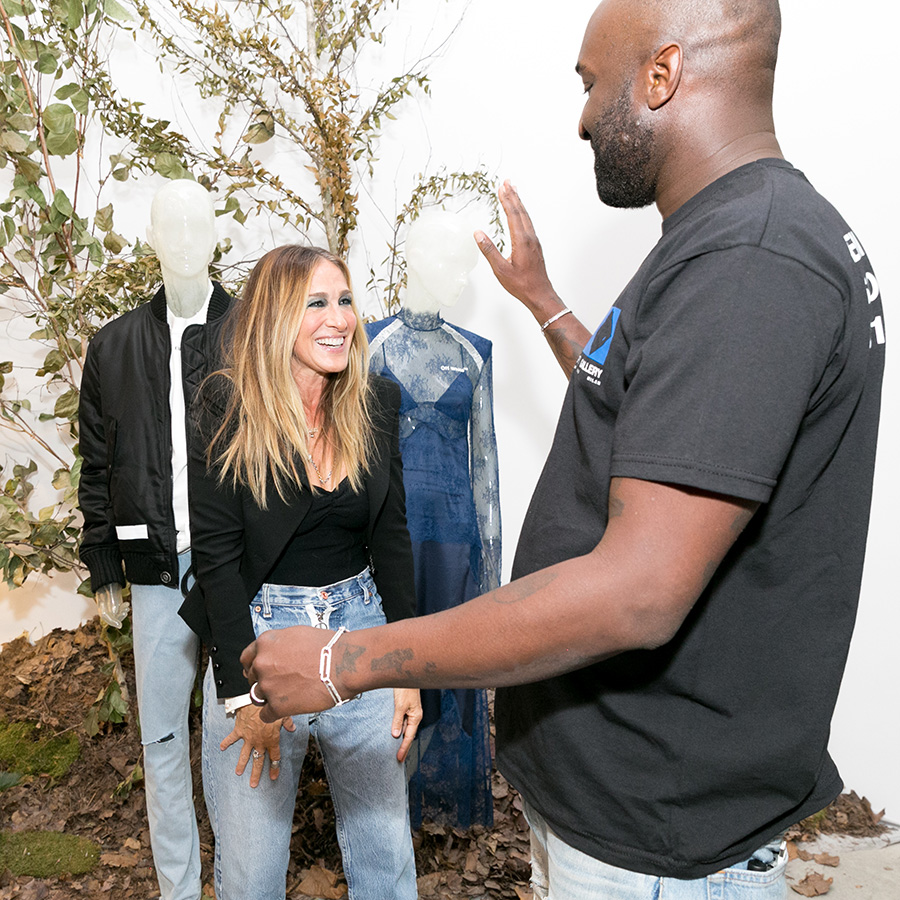 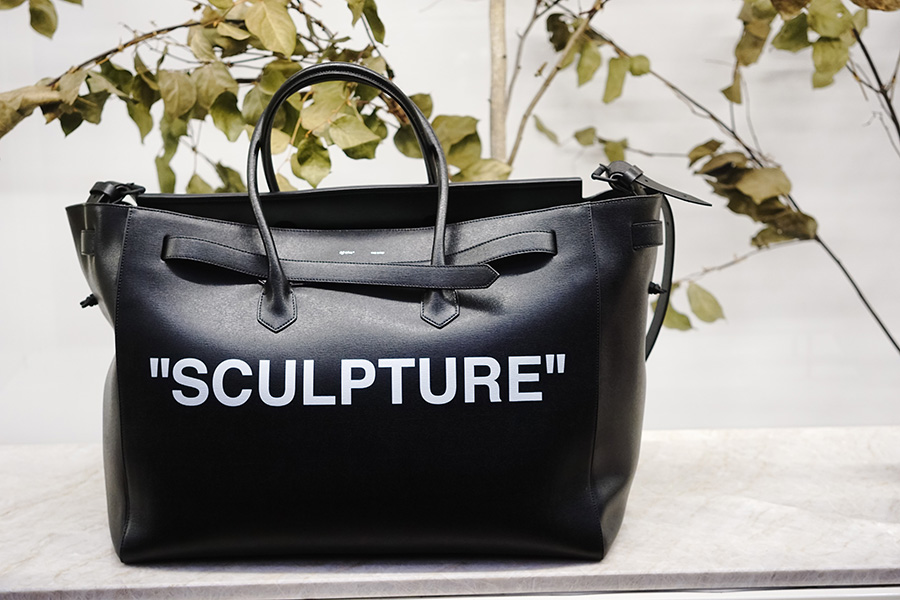 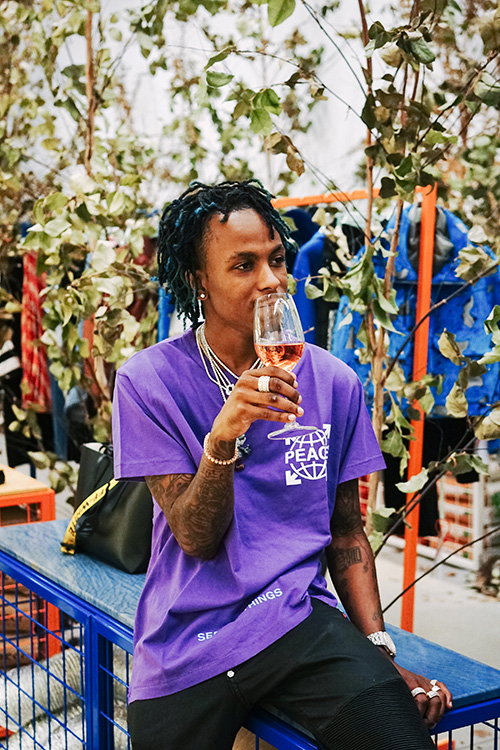 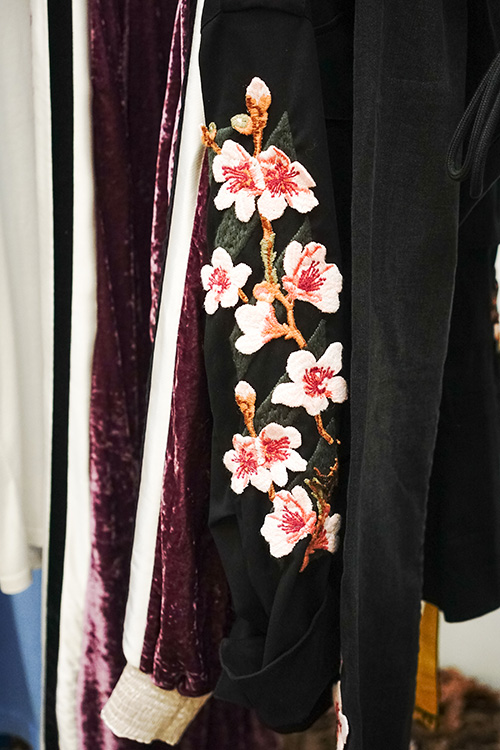 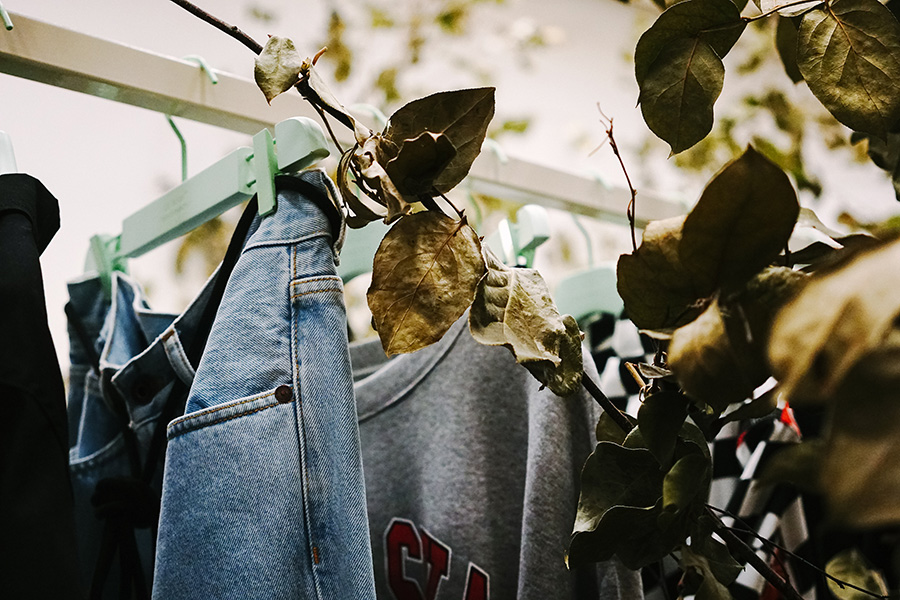 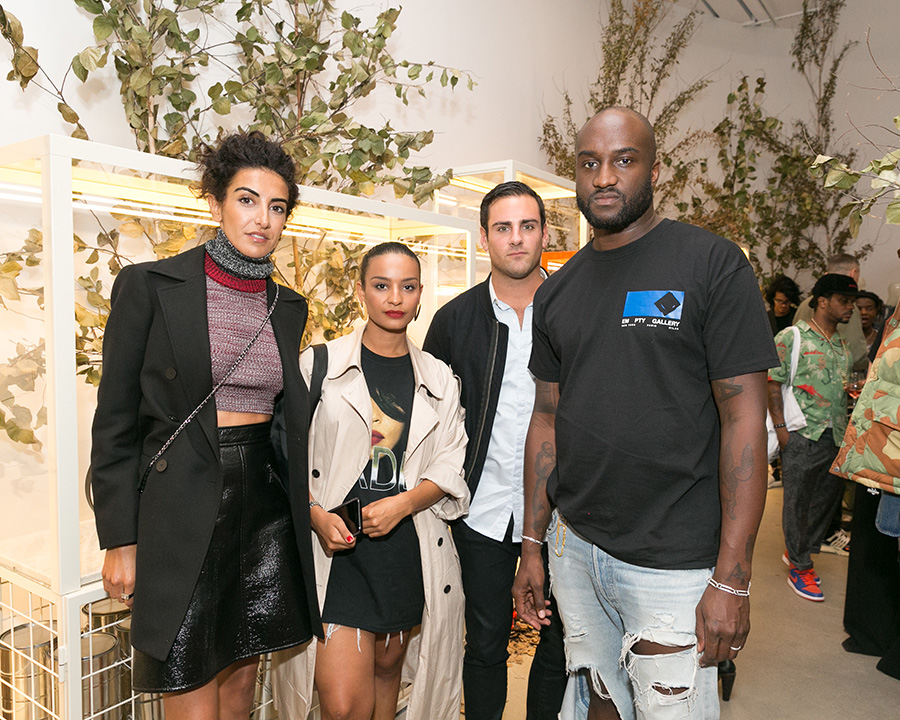 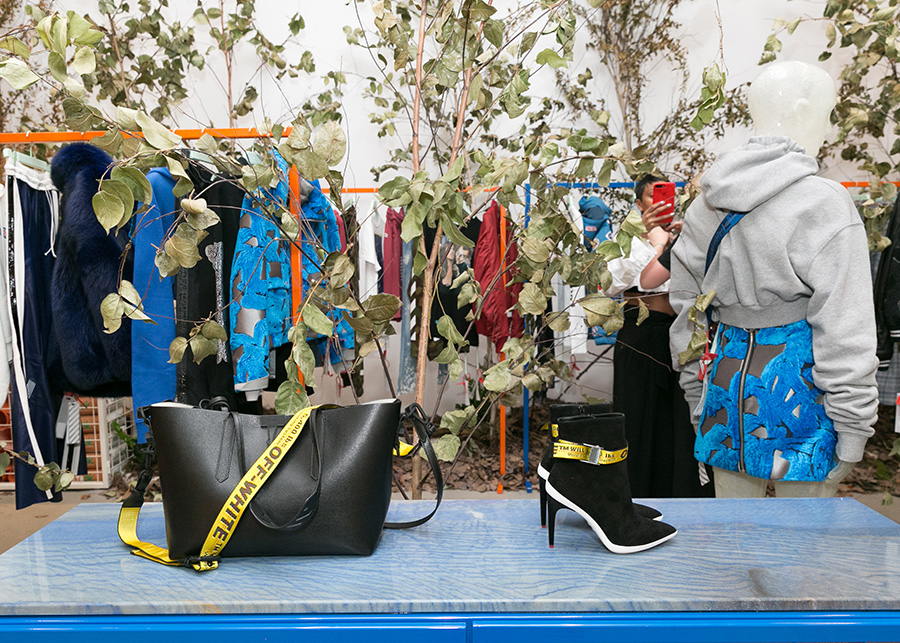 
Is a contemporary art gallery founded in 2017. It is a new conceptual platform merging art and programmed experiences.
It is a physical space in the soho area of New York City with the capability of having satellite temporary iterations around the globe. It is essentially a open-space formatted to exhibit both the works of traditional and untraditional artists. The think tank surrounding the open space is that it is multifaceted, including thoughts and perceptions from different disciplines. A playground for the experimentation of mixing different branches of art and current culture and exercising these actions to the Nth degree. Adjunct to “EMP TY GALLERY” is “FINE PRINT” a publishing house with the same ambition to document and publish the work of artists.

“ANOTHER FIRST SHOW” is the work of curator Piotr Niepsuj outlining his perspective of Off-WhiteTM SS18 menswear fashion show that took place during PITTI UOMO, on June15, 2017 in Florence.
The show was presented in collaboration with artist Jenny Holzer and was an invitation to reflect on world situation “TEMPERATURE”.
Is a take on convention of a gallery exhibition as a white cube, a hostile space with concrete floor and some different objects in it. These objects are art, usually expensive.
The atmosphere inside is almost sacred. You are supposed to speak silently and obviously you’re not allowed to touch the pieces. The presence of guards reminds you constantly how precious all the exhibited objects are. The guards are sitting in the corner of the room or walking around, controlling the whole situation and making sure none of the objects is in danger. 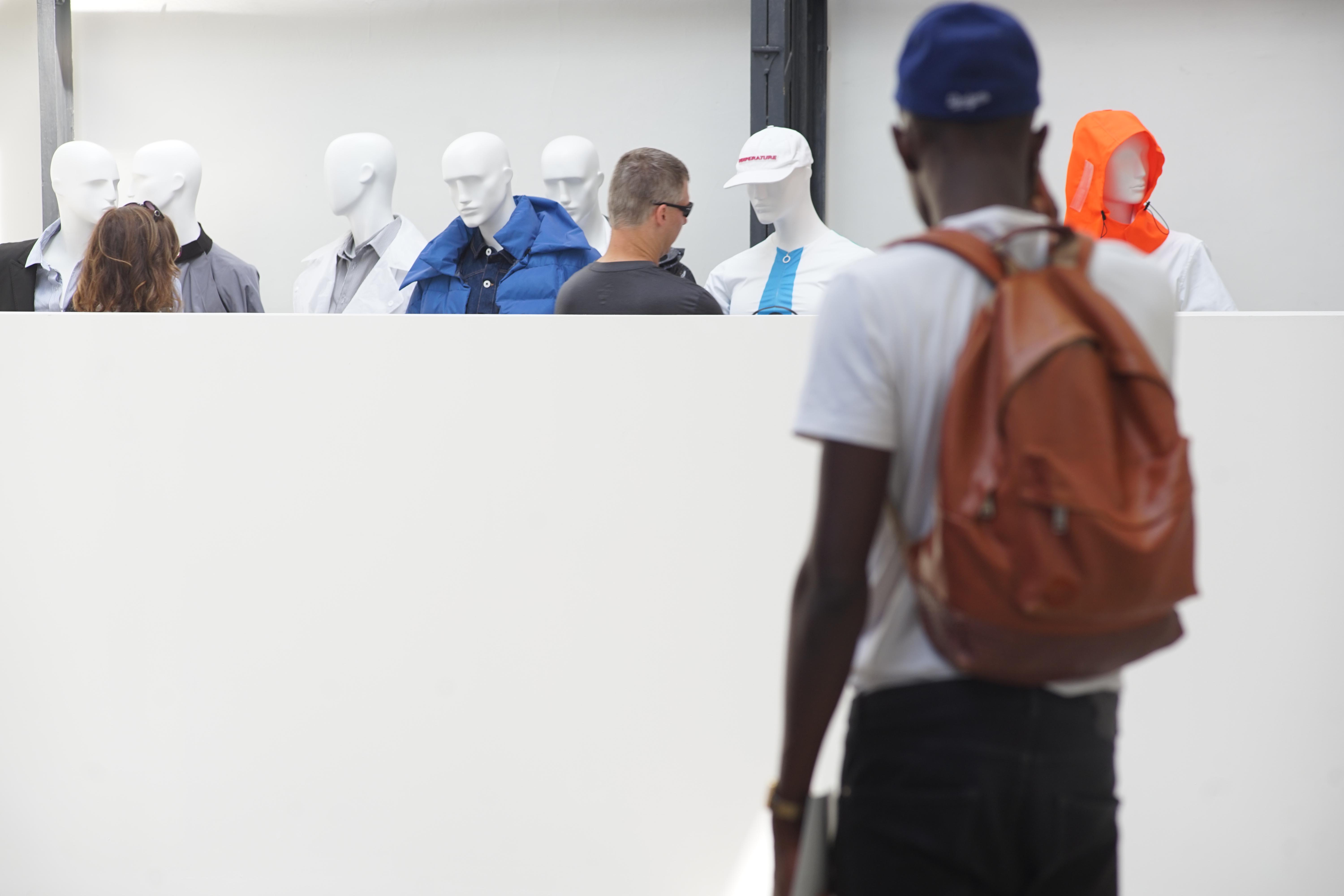 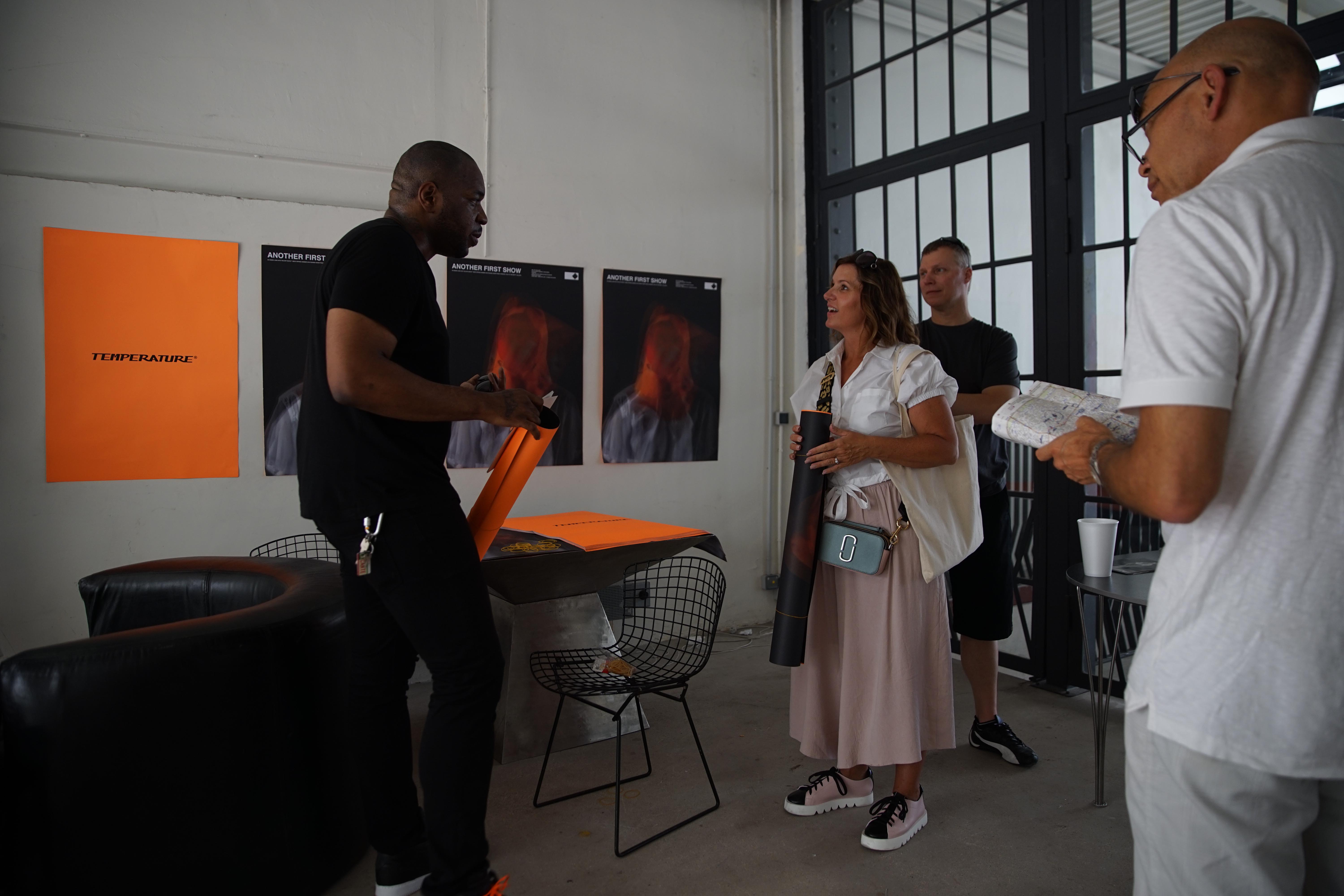 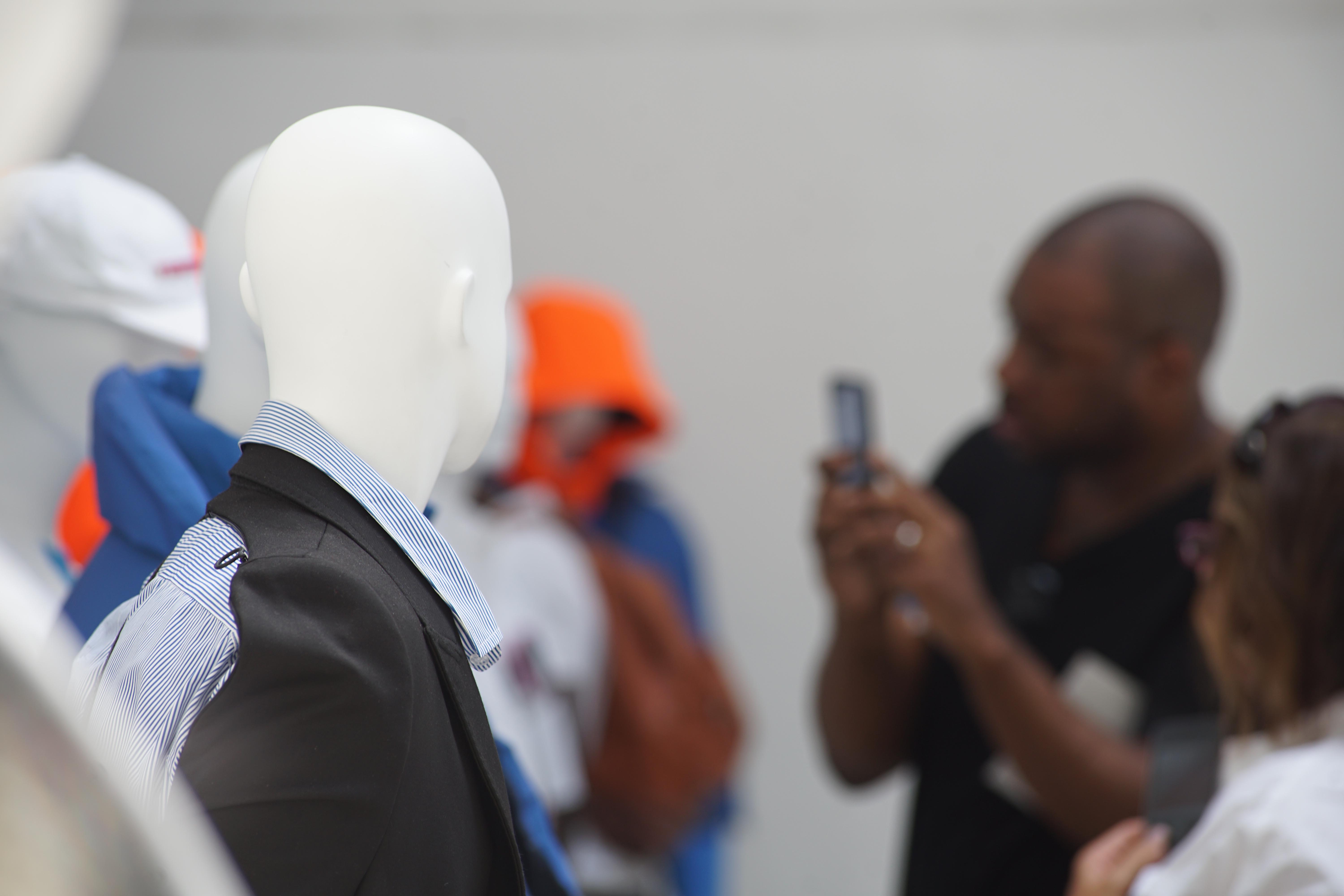 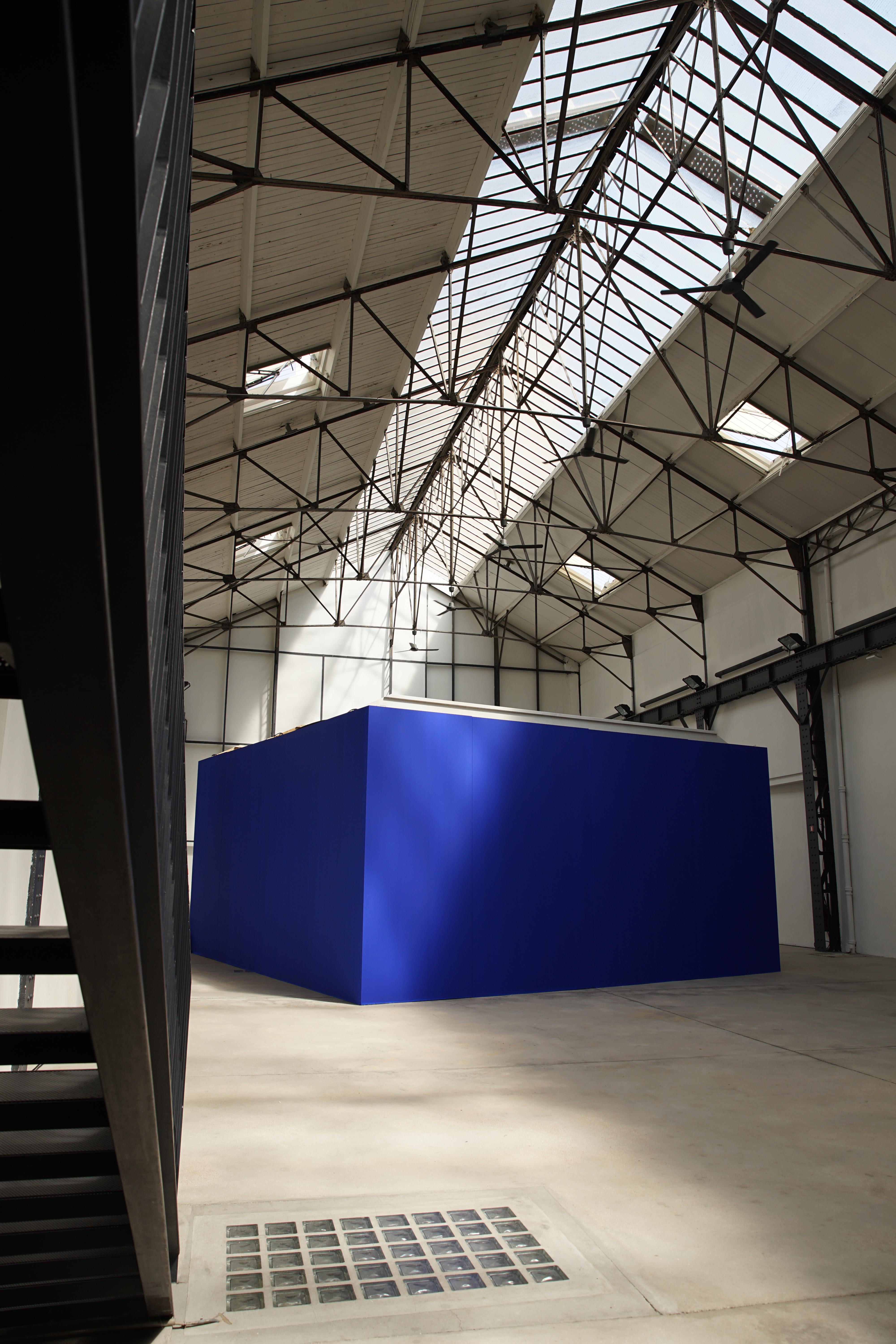 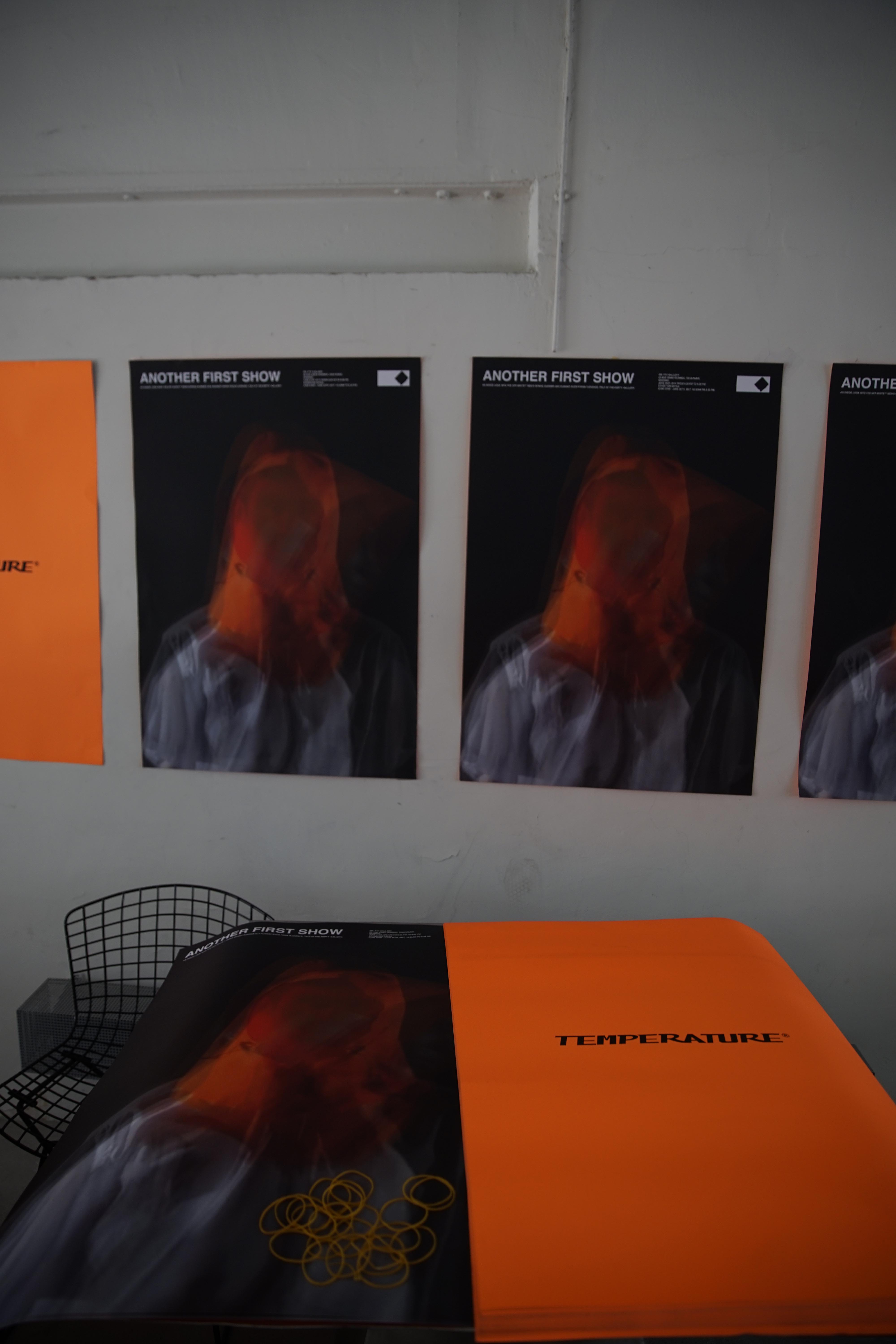 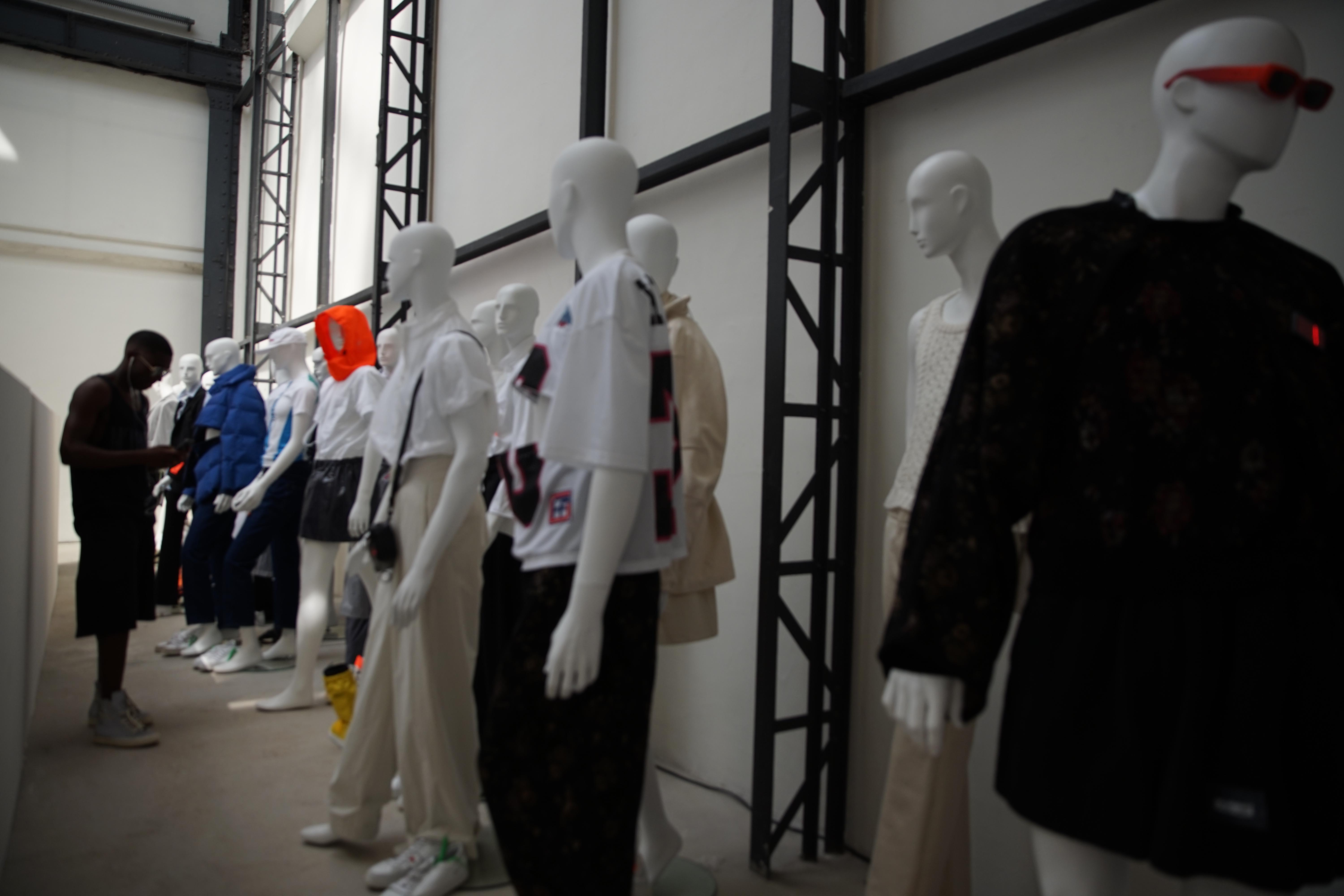 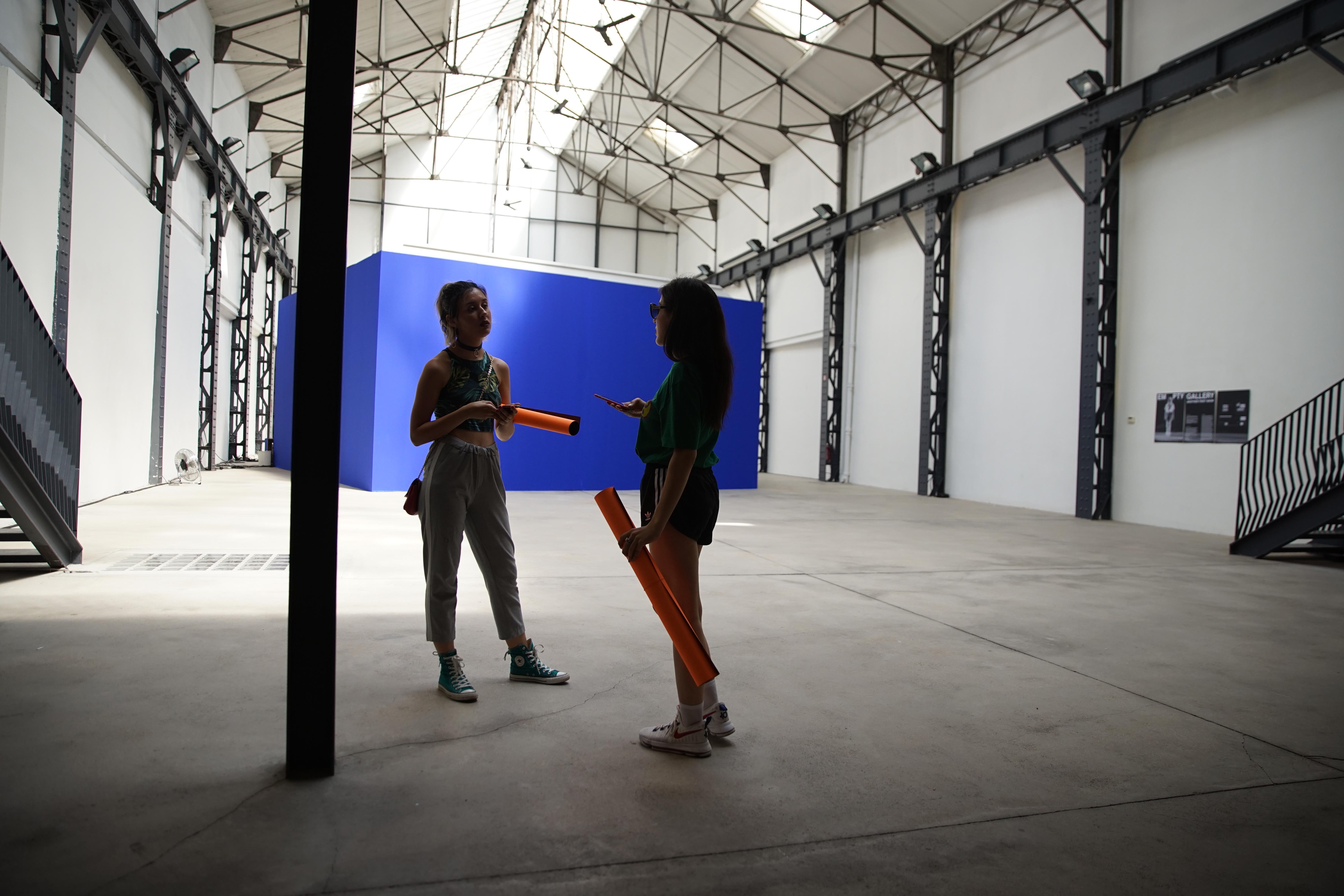